Our little Rankins dragon Squirt is shedding. And last night we got home and all the skin on his back had come loose except for right at his neck. He had a distinctive superhero look about him, so I had to snap a picture.

As superheroes go, Squirt would not be a very good one I don't think. He's cute, but he's frail and tiny and, at very least, mildly retarded. Which makes imagining an alter ego with super powers that much more comical. "Able to stare at his reflection for more than an hour straight! Able to jam his face into the corner of the tank and fall asleep that way for nine hours! Sometimes recognizes a worm as food when it is held in front of his face! Will expend barely enough effort in feeding himself to avoid starvation!"
Posted by Ed. at 5:27 AM No comments:

I've been working for a few weeks at trying to lose some weight and get more exercise. It's been going okay, and since I've been walking almost every day the weight has started to come off. I was motivated Saturday to do something a little different, so I drove to Harpers Ferry where I had seen the beginnings of a trail before.

It's called Maryland Heights and it was steep. S-T-E-E-P Steep. Right off the bat it's like walking up stairs for a couple hundred yards and that's just to get to the sign that marks the beginning of the trail and has a map of the area. Being winded already, I welcomed the opportunity to stop and read all the signs thoroughly. Then it continued uphill for a really, really long time. I didn't make it all the way to the top, but got more than my fair share of exercise just going straight uphill for about forty minutes.

By the time I turned around I was really sucking wind.

Then I run into this jackass JOGGING up the hill! Okay he wasn't a jackass, he was quite friendly when we had brief exchanges both times he passed me. What a freak though. Jogging up this trail, that's like Lance Armstrong territory. Anyway, it made me realize -- as if I needed to be reminded -- how truly out of shape I am.

But I think if I work on my stamina and legs throughout the week, maybe I will try the Maryland Heights trail every weekend and use that to measure my progress. I'll never jog up that damn thing, but maybe by the end of summer I can get to the top without stopping to "read."
Posted by Ed. at 10:54 AM No comments:

Not just a long weekend... 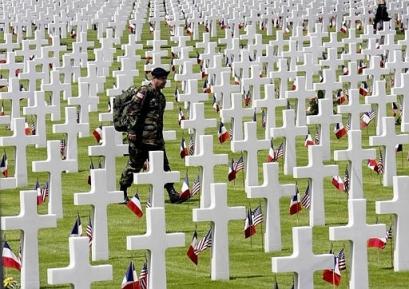 I hope everyone has a happy and safe Memorial Day weekend. But please remember the true meaning of the holiday, and honor those who have sacrificed everything for us. God bless those who serve, and have served, this great nation.
An American soldier walks through the graves at the American cemetery in Colleville, Normandy, France, for the 60th anniversary of D-Day Sunday, June 6, 2004. AP Photo/Jerome Delay
Posted by Ed. at 10:20 AM No comments:

I have never been to the Andrews AFB Joint Services Open House and Air Show, mostly because it happens the same weekend as the Preakness. For some reason we have traditionally not really felt like doing anything the day after Preakness. Sort of an annual flu bug or something, I don't know. But today, despite a rainy forecast, decided to make the trip.

We didn't end up staying through the heaviest rain, and missed much of the afternoon program including the premier demonstrations like the Blue Angels. But still it was a memorable day.

I have to say, it is a real treat to be around the military in any circumstances. But a huge event like this is a showcase for the organizational and logistical skills of the Armed Forces, and was a joy to watch. I don't think I've ever been to a large scale event that was run this well. Parking was at FedEx Field, home of the Washington Redskins. The security checkpoint was there at FedEx, and then shuttle buses took people over to Andrews. An abundance of checkpoints, personnel and buses made that process a breeze.

Once we got to Andrews it was more of the same. Everything was clearly marked and meticulously organized. And, of course, when they say the program starts at 10:00, they mean 10:00:00, and it started right on time.

In addition to some cool aerobatic stunts, the static displays on the ground were neat as well. But as I said, it started raining pretty good and we started feeling the effects of the previous day and we decided to pack it in for the day.

But we'll be back next year, hopefully we'll have better weather.

Sarah, Angie, Sarah and Sandy at the Preakness. Aren't they pretty? Well we were talking about this blog and Sarah on the left mentioned that, while she does check in from time to time, she notices that it mostly just has a lot of fish pictures. Well in the interest of appealing to a broader audience, I am taking this opportunity to mix things up a bit...

Time will tell -- three weeks of time, to be precise -- how special this moment was. But when Big Brown passed the field and then my camera lens on his way to the wire and the second jewel of the Triple Crown in the Preakness Stakes, I couldn't help but feel like I was witnessing history.

Several horses in recent years have won the Kentucky Derby and the Preakness. And it's easy each time to say 'this is it!' But after a 30 year drought (since Affirmed won the Triple Crown in 1978), I really do think that this time we are looking at the Real Deal. I wish Big Brown and all the people associated with him good luck in the Belmont!
Posted by Ed. at 4:56 PM No comments:

The pictures speak for themselves, I think. What an awesome day of fishing at Rose River Farm. Beautiful weather, bugs coming off the water and most of these trout took flies off the surface. I used my 3-weight for a while. Talk about fun! Taking trout this size off the surface with a 3-weight is really, really exciting.

First Smallmouth of '08 will have to wait.

This weekend I tried to get out and catch some smallmouth, and get a little exercise in the process. As soon as I saw the river I knew the day would turn into basically a hike on a nice day, which is fine. The water was very high. I made a few casts here and there, but it was a washout.

I thought this was an interesting view, however. I'm standing on a railroad bridge that spans the Potomac at Harpers Ferry, looking downstream at the confluence of the Potomac and Shenandoah rivers. The Shenandoah, entering this picture from the right, was much muddier, and I thought the clear delineation between the two was interesting. Hopefully you can see it in this photo.

As I continued on, I saw some nice scenery - as I always do there. This great blue heron, usually majestic and graceful, looked kind of like a dork trying to scratch his face with his foot here.

And the geese with their babies were out in droves. Or is it gaggles?

I wish my wife was there yesterday, she has never seen a Baltimore Oriole (other than the baseball kind). And I saw 6 or 8 of them! They were hard to photograph (this is the best of a half dozen attempts), they flit around a lot and like to be very high in the trees. But their song is beautiful and hopefully I'll get more opportunities to encounter these birds. If you want to see, hear or learn about these birds, or any other birds for that matter, this is a fantastic web site worth bookmarking.
Posted by Ed. at 5:44 AM No comments:

At the Kentucky Horse Park, at the huge trade fair as part of the Rolex event, we had the pleasure of meeting Shane Knight. Shane is a traditional photographer -- no digital cameras, no PhotoShop, no digital prints. He has some large images printed by hand and framed in beautiful rustic wood that are astonishing. I picture them hanging over a mantle of a great cabin or lodge. But I purchased these three images in a smaller size because I just couldn't decide on one. Another thing you should know about Shane: not just crazy talented, but one of the nicest people you'll ever meet. Please visit his web site and support his art. He has stunning color landscapes and photographs of a variety of other subjects. But these western horse images are my favorite.