Growing up there were always guns in our house. My dad was a collector, hunter and marksman. Civil war stuff, shotguns, military firearms, all kinds of stuff. Even a crossbow (which I shot once at - and through - the dartboard from across the basement). But back then, to my eye, one rifle hanging on the wall always caught my eye. A 1940s Winchester Model 94 lever-action 30-30. There was just something about it. Perfectly proportioned, beautiful.

Well that was decades ago. Dad died when I was in high school, nearly thirty years ago. His entire collection scattered to various friends and, in at least one case, family. When he got sick he sent the Model 94 to his cousin, who had long admired the gun. It stayed with him - probably took a Wisconsin white tail or two - until years later he, too, passed away. His wife, knowing the history of the gun, wanted me to have it back.

I snatched it up like the young Bruce Willis grabbed the war watch out of Christopher Walken's hand in Pulp Fiction. It needs a little work, and it was hard to make myself put it back in a box to send it to a gunsmith so soon after it arrived, but when I get it back it'll be like new. I don't hunt anymore, and never did hunt deer. A 30-30 could probably be considered overkill when the game is a sheet of paper fifty yards away, but I don't much care. It's great to have it back.

(Stephen Hunter wrote a remarkable article about the legendary Winchesters here.)
Posted by Ed. at 8:25 PM No comments:

Beautiful Day on the Gunpowder

After many weeks off from fishing I had to get out on a beautiful Saturday.

I drove the 90 minutes or so to the Gunpowder, north of Baltimore, and was rewarded with two decent sized trout, a brown and a rainbow. The brown came from the deep pool where the dam pours into the river. It is really hard to hike to, and I got in a bit of trouble trying to access it. It's a nice fish, but I doubt I'll bother getting to that area again. Besides, it's a concrete wall, not exactly the River Runs Through It backdrop that I look for when fly fishing. 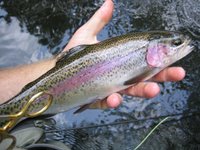 Met some great guys on the river. One of the things I enjoy greatly about fly fishing is that almost every other angler I encounter is generous with information - where the fish are and what they're not eating. I've only been at this a little more than a year and I have lost count of total strangers who have added a fly or two or three to my box, genuinely hopeful they bring me success. This was the case on this Saturday. Try this ant. Do you have one of these? Man, you gotta use this one!

I got my brown and I got my rainbow. More importantly I got my blood pressure down about ten percent, got a touch of sun on my face, got that feeling of accomplishment after hiking up that impossible hill to the upper parking lot, and got that icy cold beer I promised myself at the top.
Posted by Ed. at 7:09 PM 1 comment: