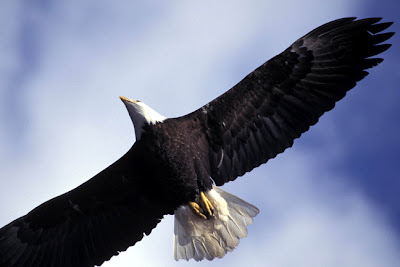 The Department of Interior took the American bald eagle out from under the protection of the Endangered Species Act today. It's certainly a remarkable testament to the success of the conservation efforts surrounding the bald eagle, which was close to extinction everywhere but Alaska and Canada forty years ago. And I agree with President Bush, who called it a wonderful way to celebrate the Fourth of July. But what happens next? The bird is an icon, still a novelty for many in this country who see them rarely or not at all. I'm not saying there's going to be open season on bald eagle hunting, but maybe stiff penalties for harming them isn't such a bad thing. What does it hurt to keep it on the list for, let's say, ever?

I guess state laws still protect it, and there is a federal law that makes it illegal to kill a bald eagle. But I don't know what the penalties are, and clearly the protections they enjoy will now be significantly less robust. I think it's something worth keeping an eye out on. But for now, I think congratulations to authorities and landowners who made this possible are in order.

Next week I will be in Montana (have I mentioned that in the last five or six consecutive posts?). My first trip there, a year ago, I saw a golden eagle for the first time in the wild. Magnificent.
Posted by Ed. at 9:18 AM No comments:

Accidental Photos of the Week

Camera in one hand. Fish (or snake) in the other. Lots of movement going on, it's hard to get every photo just right, you end up with a lot of rejects. But do those rejects sometimes have an interesting visual quality to them? Or is it just me? Here are a couple of recent rejects.

Great new album from one of my favorite artists...

Thanks to my new favorite show on HBO, I don't even miss the Sopranos... 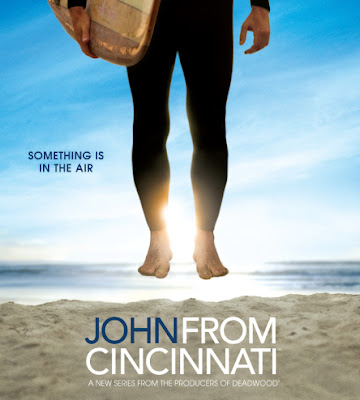 A much needed iPod upgrade brought me to the very dangerous Apple store. I ended up with a 30-gig video iPod. Remarkably watchable, this thing is just flat-out cool. 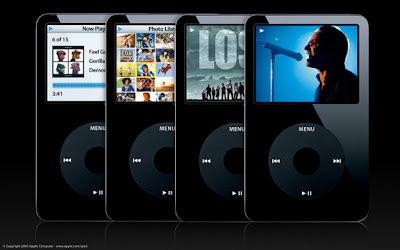 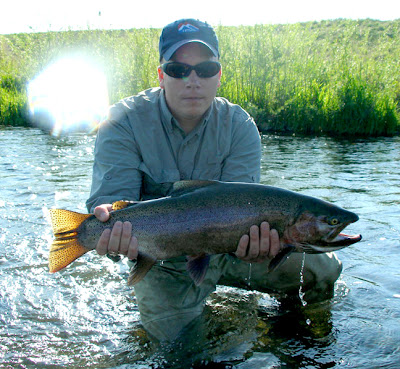 As if I wasn't excited enough about my trip to Montana in just over two weeks, my friend Joel sent me this picture from Big Sky Country. This is his friend Clint and a truly impressive rainbow! That's crazy big, man.
Posted by Ed. at 5:23 PM No comments:

"Just keep following him. He has to die soon."

I find this fascinating.

"A 50-ton bowhead whale caught off the Alaskan coast last month had a weapon fragment embedded in its neck that showed it survived a similar hunt — more than a century ago. Embedded deep under its blubber was a 3½-inch arrow-shaped projectile that has given researchers insight into the whale's age, estimated between 115 and 130 years old."

I wonder if in a hundred years, someone will catch a giant, ancient smallmouth bass that has a late 20th century olive wooly bugger embedded in his lip?

Thanks to artist Don McMichael, whose painting is shown above.
Posted by Ed. at 6:03 AM No comments:

Catching up with some photos...

I've been awfully busy lately so I haven't had time to post much. But I have some photos I wanted to share. At the Project Healing Waters 2-Fly tournament, I was lucky to hook up with a really nice trout just as photographer Beau Beasley was wandering by. He snapped a few of this fish, which measured just under 17". Fought like hell, too. 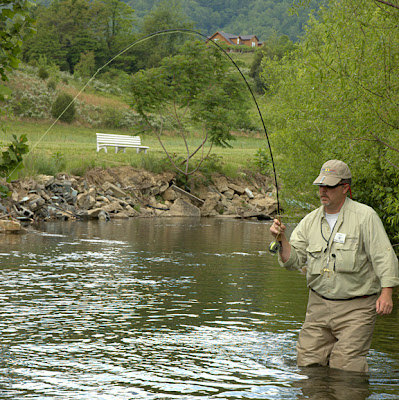 Here is the same fish up close. Beau took this photo as well...

This morning I had about an hour to kill. I am lucky to have the Potomac river so close I can sneak in some fishing even when I don't have much time. Fished from 7 to 8 a.m. and got five smallmouth. The nicest one is shown here. By the time I picked him up out of the water the fly actually fell out! Close call but I'm glad I got a picture of him. I was fishing a streamer down deep, but this fish took it basically off the top while I was stripping it in. He came out of the water when he hit it. Very cool.