Science: A Matter of Taste

I know what you're thinking: "Hey, other than figuring out ways to put more DirecTV HD satellites in orbit, what good do scientists really do?" I know. I used to feel the same way. But my own recent personal experience has me thinking otherwise. Sure, it's personal, but if sharing my story here helps just one household, then it will have been worth it.

See, there are two kinds of scientists. There are the outcasts with unkempt hair who sit in rooms and get grants to try to figure stuff out like dark matter or the origins of the universe and is it collapsing in on itself or expanding at mind-numbing speed, silly stuff like that.

And then there are the real heroes. The outcasts with unkempt hair who missed the prom and the frosh mixer because they were out there, in the real world, encountering humanity's problems and using their big brains to come up with solutions.

Sure, a lot of these solutions to life's problems go under the radar, and we the people take them for granted. Cell phones, riding mowers, pre-measured dishwasher soap packets. But then, every so often, a team of nerds will put their bad-haired heads together and solve a problem to which many thought there could be no answer.

When one of our dogs started eating poop in the yard (I will not identify him by name as he is a minor, but it rhymes with Vomit), we tried everything. (By "Everything," I mean yelling "Stop that, that's disgusting!") Frustrated, with nowhere else to turn, we looked to Science to answer our prayers. And Science came through big time with Dis-Taste, a product that actually claims to make feces unpalatable. That's right, you read that correctly. At least two doctors have developed a Miracle Drug that, when administered just once a day to all the dogs in the household, combined with a healthy diet and exercise, will within eight to twelve weeks, slowly begin to produce feces that actually tastes bad to other dogs. I know! What's next?!

We have yet to see the promised effects of the product, but in all fairness we've only given it a couple weeks and there is always the possibility that this 'habit' may be the result of a serious mental problem rather than just the presence of delecious turds nearby. But we are hopeful that we will be able to put this behind us. So to speak.

Recently I got back into shotgun shooting, after about a thirty year hiatus. I searched for and purchased a 16 gauge Winchester Model 12 pump shotgun, a favorite of my Dad's. This particular gun was made in 1952, and I immediately started shooting skeet and trap at a nearby range and having a lot of fun. Then for Christmas my wife got me a gift card for a hunting preserve on Maryland's Eastern Shore called Pintail Point.

So I invited my friend Ed, an experienced wingshooter, to show me the ropes and join me for a day of chukar hunting. A chukar is a medium sized game bird not native to these parts. I don't know for sure, but it is either in the pheasant family or, forgive me, the partridge family. Here's how the preserve works: they raise these birds, you call them up and pay for some, before you get there they take the ones you paid for and put them in a field, a guide and his dog takes you into the field where the dog finds 'em, the guide flushes 'em, and, if all goes well, the hunter shoots 'em. 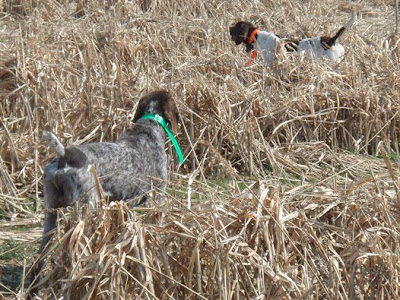 The day was really fun, both Ed and the guide were patient with me, I learned a lot and I think I did pretty well for a rookie. Even the dogs pretended not to notice that it was my first time out there. Speaking of the dogs (That's Bucky pictured at the top, and Jig is the darker one), this was a truly fascinating aspect of the day. I've been around dogs most of my life. And I've witnessed my share of dogs intensely focused on a stick, treat or tennis ball. But these German Shorthaired Pointers, well they were a treat to watch. And when they locked on to the scent of a bird, they stop on a dime and point at it. Not with their nose or with their raised paw like you imagine, but with their entire BEING! They do not point with the graceful elegance you might see illustrated on the cover of a dog show program. But rather in a tense, contorted, impossibly still and rigid manner that looks at once extremely uncomfortable yet wholly necessary. There is nothing else, at that time and place, that that dog wants to be doing. But more than that, there's nothing else he COULD be doing. It is a beautiful mix of raw instinct and enthusiasm directed by skilled and deliberate training.

So thanks Ed for coming with me and teaching me how to hunt birds. Maybe next I can try wild birds! And thanks to our guide Jack, and his coworkers Bucky and Jig, for working hard to make my first hunt successful, memorable and enjoyable. Our Florida Kingsnake, Belle, shed today and we were lucky enough to witness and videotape it. I realize reptiles as pets are not for everyone, but you have to admit, nature is a wonderful and fascinating thing.
Posted by Ed. at 6:56 PM No comments:

Upon further review, perhaps I should have protested more vigorously when the words "Jack," "Russell," and "Puppy" were all strung together for the first time in our household.

But he's a sweetheart and I love him. And as this photo clearly shows, he is almost to the point where his feet touch the ground. I think a couple more years and we might even get him to sit still for a minute.
Posted by Ed. at 4:56 PM No comments: