Well it was bound to happen...

I have never broken a fly rod.

Correction: I have only broken one fly rod.

This is my Orvis Clearwater 5wt mid flex. My first fly rod. It's given me years of good service. I wish I had a great story about its demise. Something with the words 'monster brown trout' and 'screaming reel' and 'shattered into splinters but the beast still ended up in the net.'

But my story is more like most people's stories of broken rods. I ran over it with my car.

Oh the details are not important. Rod propped against a mirror, a door closed in a hurry to beat a rainstorm, a beer and a conversation later providing more than enough time to forget the rod. Backing up, an awful noise accompanied by instant realization. I opened the door, saw the rod and reached for it. Didn't budge. Maybe because the front wheel was pinning it to the ground. When I pulled forward to free it I was relieved to find that the butt section was intact. The tip, however, was not so lucky.

And to add insult to injury, this is the last fish ever caught with it.

Born and raised just outside of Washington, DC, I first started watching and rooting for the Redskins in the Billy Kilmer era. Back then you were either a Billy guy or a Sonny guy, and my dad was a Billy guy. And back then, season tickets were less accessible and more sought after than the Holy Grail. The standard line was, it's not even worth getting on the waiting list, because nobody ever gave them up and they were handed down from generation to generation and the list was already fifty years long.

Well, coaches and owners and players and fans and stadiums have come and gone. Superbowls have been won and lost. Riggo. Mann. Manley. Glory Days. But it all comes rushing back when I walk in a sea of burgundy and gold toward the stadium before kickoff, and I hope along with the sea that maybe this year the Glory will return. And I kid mysellf: if not this year, certainly next.

And now, I found out yesterday, more than thirty years of ups and downs later, and seven years after signing up for the list, I will have my very own season tickets. My own seats, high in section 406, from which to witness the good, the bad and the ugly of the current and next generations of Redskins.

Wow. This is a rivalry that has NOT gone the Redskins' way over the past few years. But tonight's 20-12 victory over the Eagles was a big, big, big win.
Posted by Ed. at 8:58 PM No comments:

Beauty and the Beast

Gotta love a brook trout. This has been a disappointing summer for fishing, mostly because the smallmouth fishing has been so slow and poor. But these trips for trout - today with my friend Matt back to Big Hunting Creek in Maryland - are enough to make me remember why I love fly fishing so much. Just a couple of these beautiful brookies, but a perfect weather day on the water. Oh, and I continue to astound myself as to how small a fish I can catch. This one came to my attention only when I brought the line back for another cast. There he was, flying through the air on the end of my line. Not the first time I've done that, but it's pretty funny when it does happen.

I've only been to New York a handful of times. Once was in the mid '80s, my sister worked in the city and lived in New Jersey. We visited and went to see the unveiling of the newly renovated Statue of Liberty and the fireworks show there on July 4th. 1986, maybe?

Anyway, walking through Manhattan she showed me the place where she used to work. I walked up to the building, touched my feet to it, looked straight up and snapped a picture.

The photograph is not good. Cheap camera, cheap film, poor conditions, poor composition and careless storage of the only print for decades (negative lost). It is unremarkable in every way, except the One.

Off and on, from September 2001 until about a year ago, I remembered and looked for that photograph. Boxes and boxes of crap in a damp basement. Many times I declared it lost, only to renew my search a few months later. Then I found it, tucked into the fold of a cardboard box filled with pictures from college and other unimportant stuff. I decided not to get it restored or scanned or improved in any way, but rather to frame the snapshot as is, my closest connection to the towers I'll never forget. Because even just for a moment, a moment that passed and was almost immediately forgotten for so long, I was there.

-- Herman Melville, on the death of Abraham Lincoln
Posted by Ed. at 6:07 AM 1 comment: 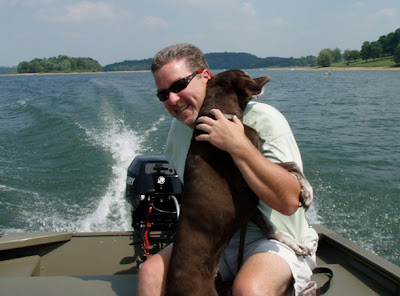 Recently I got this fishing boat and although I'm still getting comfortable with it (my first boat), we decided to spend the day with the dogs at lake in nearby Pennsylvania. 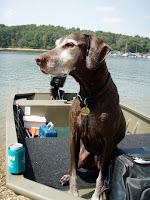 My dog, the German Shorthair shown here trying to climb into my pockets, is a supposed hunting breed, with webbed feet for supposed water navigation. Well she enjoyed splashing around from shore (although she is a truly awful swimmer), I have to say she just plain did not dig the whole boat thing.

My wife's dog, the Jack Russel Terrier - from the Latin Terra, I believe, meaning ground - is a breed designed to go into holes in the ground and such things, and probably shouldn't be the more adept at water sports than the Shorthair. But he's a natural. And by 'natural,' I mean being on a moving boat is such second nature to him that, while moving at top speed he very much wishes to simply walk off the front of the boat into the water.

But the whole episode was amusing and fun, and I made a little home movie of our day that you can view here. 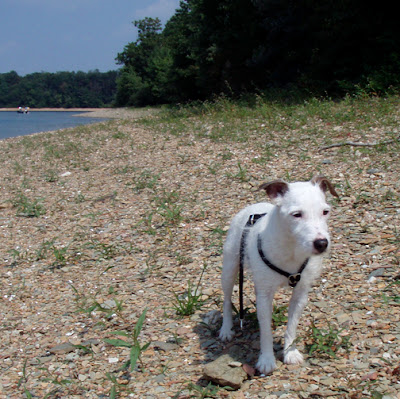