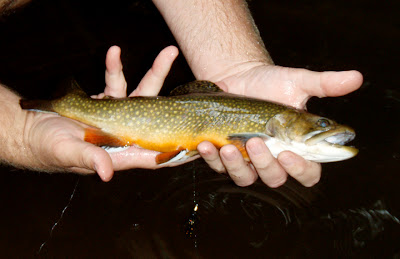 This evening I went with some friends to Big Hunting Creek. Or, as I call it, The Creek At Which I Have Never Even Come Close To Catching A Fish. But the weather was perfect, water was low but not as bad as I expected. And it wasn't too long before fish were being caught. I figured, at least I can SEE someone catching a fish here, not a total loss. 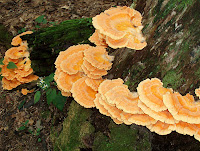 The guys were catching mostly Brook trout, with an occasional brown thrown in. Beautiful fish all. My friend Kevin pointed out to me that - and the light was too low to use polarized sunglasses - you can actually pick up the white 'trim' on the tips of the brookies' fins. So that's how I spotted and, ultimately, caught my single fish of the day (above).

But he sure is pretty, and I believe that's safely the largest brook I've ever caught (I've only caught about five total). And I have caught zero fish enough times that One fish is almost always just fine with me. Today was one of those days.
Posted by Ed. at 6:15 PM 3 comments:

He Can Do the Squirt


Right after I posted Squirt's video a while back he went nuts with the arm waving thing and I got better footage of it. I decided it just had to be set to music, so...
Posted by Ed. at 6:22 AM 1 comment:

I finally caught a stupid fish this morning. This is actually a very nice, meaty trout, a welcome relief after a post-Montana slump in the fishing department... 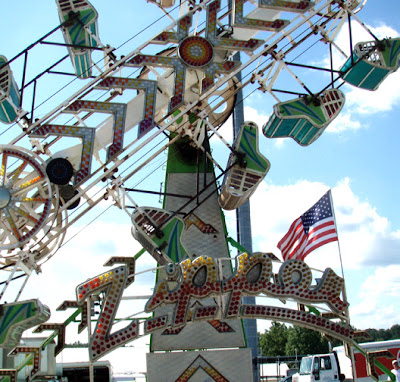 Then this afternoon we went to the Howard County Fair, which was not great but at least 100 times better than my own county's (Loudoun, VA) lame fair. This ride, though, was one that I voted most likely to end badly. No injuries in the time we were there, but check back tomorrow. More photos from the fair below... 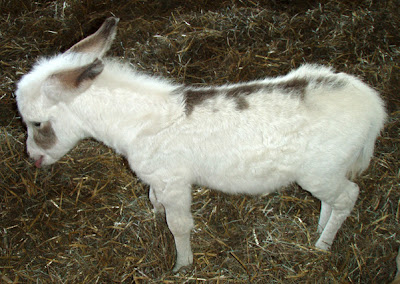 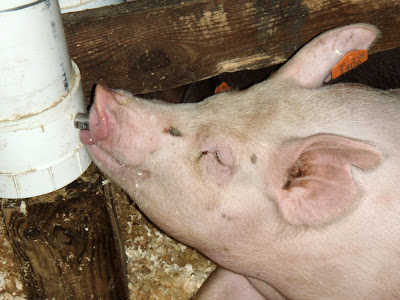 I won't quote it becaue I don't recall exactly how it goes, but I paraphrase a great Winston Churchill observation: Dogs look up to us. Cats look down on us. But pigs treat us as equals. 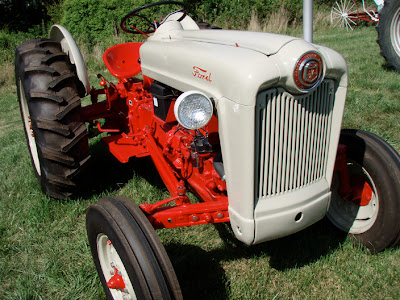 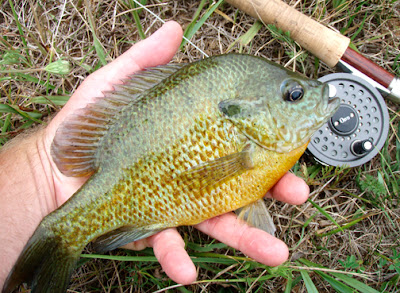 Well, sitting around on a Sunday waiting for the work week to start didn't sound like the smartest plan. So I decided to take the 3-weight across the street and stir up my neighbor's pond, hopefully get to remember what it feels lke to catch a fish again. I used a little beetle pattern and caught this very large (in my opinion) sunfish on about the second cast. A big sunfish can put a bend in a little 3-weight, and it's a lot of fun.

Then my wife came over with a few beers in a cooler. She also arrived just in time to mock me for catching this bad boy. 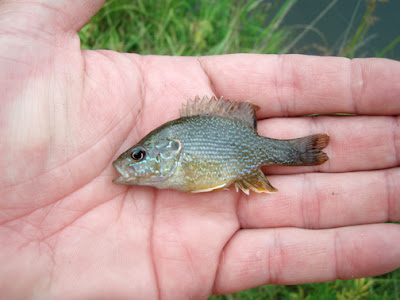 Regardless, I forget how much fun it is to catch sunnies on a light rod. I recommend it if you have any ponds nearby.
Posted by Ed. at 1:59 PM 1 comment:

Close Call with a Carp! 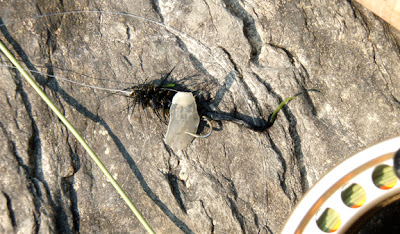 It's been a while since I caught a fish. And today wasn't going very well - the river was up, which I didn't expect (it's been very dry), and it just wasn't really working. I spent a lot of time not fishing, looking for places to cross, etc. But I hiked a long way and got some sun and exercise, so all was not lost. 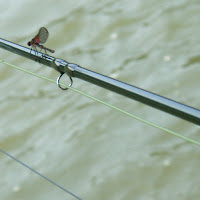 So there's this big still pool I need to get around in this particular spot on the Shenandoah, I had just about given up on fishing when I saw some huge carp feeding. At least my understanding of feeding is, they brush the bottom with their tails, stirring up sediment and yummy little carp treats, then spin around and feed on what's been stirred up. The water was not clear, but was shallow enough that I could witness this behavior.

I didn't even bother to change the fly (I don't have any 'carp' flies) so I just lobbed the black wooly bugger that was on my line in the middle of the stirred up sediment a few times. I felt a tug, set the hook and thought my day's luck had changed. In no time at all he had taken half my flyline in a straight line, making that torpedo wake like you see in the movies all the time.

But just a few moments later, the line went slack. When I pulled the wooly bugger back in, I noticed a single carp scale afixed to the point. Looks like I had foul hooked him.

However, feeling the weight of that carp on the line, and knowing many spots nearby where I often spot carp, I am more commited than ever to carry some carp-appropriate flies and try to catch one of those huge ugly bastards.
Posted by Ed. at 9:36 AM No comments:


This is Squirt. He is a Rankins Dragon, which is like a Bearded Dragon only much smaller. We also have a Bearded Dragon named Daisy, who is a girl, about five times Squirt's size, and in a cage across the room from him at the time of this video.

What he is doing, and he doesn't do it often so it's hard to get a good picture or video, is arm waving. This is normal social behavior for dragons to exhibit toward other dragons. The book we have says that it either means, "Hi, I'm a Bearded Dragon!" or "Please don't hurt me!"

Learn something new every day. And if you surround yourself with odd new animals all the time, you're likely to learn more than one new thing every day...
Posted by Ed. at 5:15 PM 2 comments: 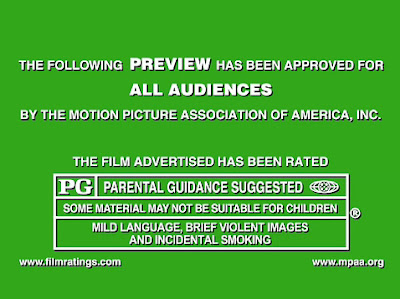 A recent increased emphasis on considering smoking when determining movie ratings has irritated me a bit. Barry Bloom, dean of Harvard School of Public Health says, "By placing smoking on a par with considerations of violence and sex, the rating board has acknowledged the public-health dangers to children associated with glamorized images of a toxic and lethal addiction to tobacco." Flyfishin' blog says, "Are you kidding?" If smoking has been placed on par with considerations of violence and sex, then violence and sex are not getting enough consideration. I don't smoke. I don't have kids. So maybe I'm not the best person to speak to this. But if you're offended by everything, are you REALLY offended by anything?
Posted by Ed. at 5:55 AM No comments: