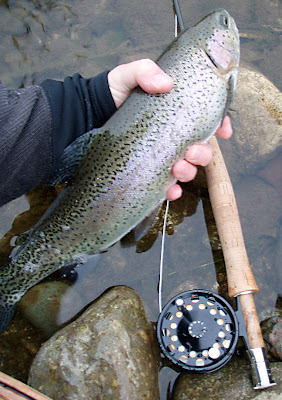 With the exception of a memorable day on the water in the July Montana heat, the rest of my outings in 2007 ranged from frustrating all the way up to below average. Extremely low water levels and only a slightly higher skill level added up to an end of year summary that looks something like this: 'Next year will be better...it HAS to be!' I was very close to hanging up the gear for the season and focusing on a fresh start in the spring, in fact. But I was looking at eleven days off in a row, and figured, what better way is there to quickly get out of work mode than to go fishing? So yesterday, courtesy of Rose River Farm in Syria, Virginia, I had the kind of day that erases an entire year of fishing frustration. 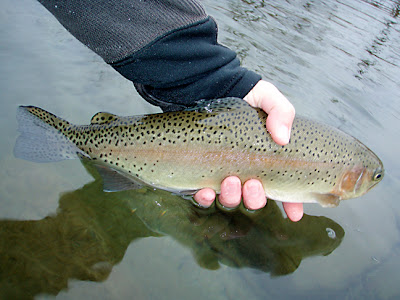 Completely overcast, air temps in the upper 40s, and water temps - according to the ten digital thermometers I keep in my socks - quite a bit colder than that. Perfect fishing weather. I was also, as luck would have it, the only angler on this beautiful stretch of private trout water. Nothing was rising, so I just started drifting big nymphs and wooly buggers and San Juan worms through fishy stretches. Let me be clear on something here, these are not stretches of water that Seem Like They Would Hold Fish, you can SEE dozens of huge trout stacked up in the gin clear water. Before long I started to catch them. They are incredibly strong! Three in particular this day took me on five or six or seven runs before I could net them. But they all fought hard, most lept in the air multiple times, and several took my fly rather than be subjected to my net and camera. 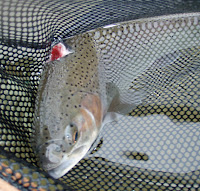 This fish was sure having a bad week! Looks like a great blue heron took a chunk out of this guy not more than a day before I landed him. He seemed absolutely healthy, gaping wound notwithstanding. But he fought hard. Bad news is, that wound is highly visible from above the water, and will probably result in future prey attacks. I hope he makes it though, any fish that survives that deserves to grow old.

How many fish did I catch? I don't know. At least fifteen to hand. They were all big. Many others on the line for a second or two here or there. There were stretches when I had a strike on every cast. But the really fun thing about fishing here is that you get to work on landing big fish, fighting fish. And if I'm at a public water recently stocked with 9" rainbows, I can convince myself that getting them to take the fly is the prize. I am lying. The prize is having to fight a fish to successfully land it, and this happened more yesterday than in all the rest of the year of local trout fishing combined. 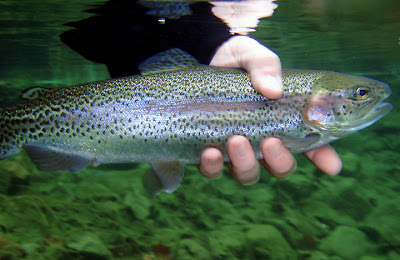 Yesterday was also a big day for my underwater camera. I tried a few shots of fish as I released them, then realized I could take little movies of the same thing. Here are three of the best shots together in one video clip. Pretty cool!


Thanks to Douglas at Rose River Farm for not only saving my season, but providing the single best day of trout fishing I've ever had. As I sat at the gazebo in the fading light, finishing a Sam Adams Winter Lager and lighting a cigar, I watched the trout below. It was hard to complain about anything. And thoughts of a poor year of fishing had long since faded. 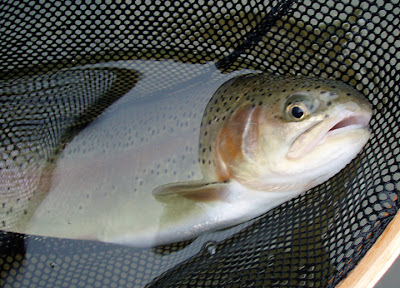 So Merry Christmas to you and yours, and thanks for stopping by this blog from time to time throughout the year.

First Snow of the Year!

Maybe it's a holdover from when I was a kid, but I always look forward to the first snow of the year, no matter how much traffic havoc it wreaks.

I actually tried to go to work twice today. First at 6:00 a.m., just as the snow was starting. I got about eight miles into my 55 mile commute and it stopped. An hour later I was still there, so I turned around. Checked traffic reports online and tried again at 9:30. Got to the same spot and stopped. The only reason traffic moved up at all was because some people ahead of me got out of line to turn around and go home. Which is exactly what I did. This area is ridiculous in terms of A) preparation (they talked on the news all night about how ready they were, yet roads were left untreated, and B) the incompetence of drivers. Winning combination.

But all that is forgotten with this highlight outside, our new dog Gromit getting dragged around the yard at the end of a stick by Sierra. Gromit's first snow. At first he didn't notice it, then he tried to eat it all, and finally he settled in with the realization that it's his very favorite thing. I almost agree.
Posted by Ed. at 10:46 AM No comments: