This past weekend, on a beautiful and crisp autumn day, I was driving back from Bass Pro with my 14' Tracker in tow, having had a little work done on it. I don't have any immediate plans for it this fall, but it was nice to get it back after a few weeks, I just like to have all my 'stuff' in one place. I was hurrying a bit, we had plans to unload the boat and immediately head up the road to Charlestown Race Track to place some bets on the great day of racing that is the Breeders Cup. I was excited to plunk some money down on my boy Curlin, who treated me SO well on Preakness day. Good music was streaming in from a satellite overhead, and life was good.

I came upon and began to pass a long string of cars in the right lane with flashers on. Funeral style. As I looked over at the cars to my right, I was struck by how young all the occupants were. Sad, I thought, and thinking of ways that young people die I imagined a car accident.

As I approached the front of the line I saw two immaculate white Cadillacs. The trailing limousine had blacked out windows. The hearse in front did not, and when I saw the casket through the rear door the music in my car, in my head, stopped. An American flag neatly draped over a white coffin. Not an accident victim, but a volunteer soldier, an American hero inside. And a grieving family behind, separated from me by so much more than two panes of glass. A mile of friends and colleagues behind.

I felt a lot of things at that moment. Grief. Gratitude. Pride. And shame. Just moments before I would have said, if there were anyone else in the car to hear, 'what a great little day I got goin' here!' Then reality dragged me out of my car and punched me in the gut so hard I never really got my breath back the rest of the day.

I'm involved, I do some work with wounded vets and think about them often through the course of every day. I do that work because I don't know how else to thank them for theirs. But this day was a reminder that, well, that everyone could use a reminder. And here just a few days later, I can see my boat from the back window of my house, Curlin roared to another victory and helped pay for that last trip to Bass Pro, the songs from my XM radio are once again reaching my brain, our home is blessed with puppiness and, I have to admit, life is good still. Or again. That wind-knocked-out-of-me feeling lasted a while, I still feel a twinge of it now as I write this, but it fades, unfortunately, as it always does.

To the family shrouded in that white limousine traveling west on Interstate 70 outside of Baltimore last Saturday, thank you for your sacrifice. I'm deeply sorry for your loss. And I will try my best to hang on to the feeling that seeing your son or daughter that day gave me. A smaller, more meaningless gesture I can't even imagine, but it's all I know to give. God bless you.
Posted by Ed. at 5:14 AM 4 comments:

What we really need in this area is one of those hurricanes that weakens over land, but comes up the coast and stalls, dumping inches of rain on the entire region. But that's just not in the cards. However, we are in the middle of an encouraging three-day rain 'event,' and that's sure a lot better than nothing!
Posted by Ed. at 7:49 AM No comments:

This is Gromit! We got him yesterday while we were at the national JRT Trials in Havre de Grace, MD. Our other Jack Russell, Scooter, can be a pretty big jerk with other dogs. He was with us, so they met on neutral ground. My German Shorthair was home by herself so introductions needed to be made last night when we got home.

I won't lie, my dog is not at all dog friendly, so I was extremely nervous. But all introductions went much, much better than I anticipated. Bringng a new pup into the house with two 12-year-old dogs with, uh, strong personalities won't be without its challenges. But the first 18 hours have given me reason to be confident that we'll be able to manage everyone.

Possibly the best part, he's four months old and has already gotten a big head start on housebreaking and crate training. He might be housebroken, actually, he seems to be. But I'm not a fool, one day without an accident does not a housebroken puppy make. Regardless, a lot of the early hard work has been done for us already.

That's more like it. I took the opportunity after breaking my Clearwater 5wt to upgrade when I got my replacement rod. This is a beautiful T3, 8'6" 4-weight. I think it will be a perfect little trout rod for small to medium sized streams, and occasions when a little breeze makes my 3-weight a little hard to handle. I already had it out in the yard this evening fishing for lawn trout, and it really feels great. Hope to have a fishing report soon! Meanwhile, a big thanks to Orvis for honoring the warranty, allowing me to upgrade, and handling the whole thing quickly and pleasantly.
Posted by Ed. at 4:06 PM 5 comments:

This was really interesting. In 1963, a B-52 crashed deep in the woods about ten miles from our cabin. A local snowmobile club maintains a memorial there. The crash left few large pieces of the plane, yet there were two survivors, including the co-pilot whose parachute did not work. He landed in the snow, upright in his ejection seat. It's still an eerie site, a debris field that covers acres, including airplane parts stuck in trees or half buried in the ground.

Pop quiz: This is either A) the opening scene of a horror movie, or B) the place where we got fresh lobster for dinner one night.

The answer, surprisingly, is B. But the lobsters were great, caught that very morning.

Some other shots from the week, in no particular order...

Douglas and I floated the 3.5 miles of the East Outlet guided by Dan from Maine Guide Fly Shop. Dan has a reputation of being The Man in that part of Maine when it comes to fishing. Here's Douglas and our ride...

I got the first fish of the day, this is a female landlocked salmon, and Dan said it was likely two and a half years old, her first annual trip into the river.

Then it was Douglas' turn, and he caught I think four brook trout in a row. This first one was a really nice size...

But the colors on the second fish were absolutely stunning...

Next up I found a match for my earlier salmon, this time a male of the same age. Colored very much like a brown trout...

The river dumps out into Indian Pond, an enormous (by my east coast standards) body of water without a visible structure anywhere around the perimeter. With the exception of a few beautiful campsites accessible only by boat, this place looks like it looked a thousand years ago.

This is the East Outlet of the Kennebec River. The first day I waded this by myself while the other guys were out in the north woods looking for birds.

I didn't really know what I was doing, this is different than the salmon fishing in New York I had done before. But the word was, nymph or streamer fishing. I tried some stone fly nymphs of various sizes -- I could see stone flies on the rocks -- but they produced nothing. I ended up fishing a black wooly bugger with a little green flash like a nymph with a strike indicator, and caught this gorgeous brook trout on the second cast.

A Spinoni (Enzo), three Setters (Gus, Jus and Smoke) and a Pointer (Gem) helped make the trip more productive for the bird hunters, and certainly more enjoyable for me. These five dogs, some of whom met eachother for the first time here, got along great. Bird hunters are serious about their dog training, and as a result these dogs were well behaved and a real joy to be around.

This is Gem posing with her first taken bird, a woodcock. Great dog. That's my friend Ed's beautiful shotgun. All the guys had shotguns suitable for hanging in any fine art gallery, but this one is special.

This is me with my traveling buddy, Enzo. Spending a week with this dog, including two VERY long travel days, has put the Spinoni breed on my short list of possibilities for my next dog. Sweet, friendly, and as goofy as a Maine winter is cold.

My friend Douglas and I and his Spinone (more on this wonderful dog later) drove up to Greenville, Maine together to meet up with some friends and do some fishing and bird hunting. I didn't hunt, but they were after woodcock and grouse in the field and we were after landlocked salmon and brook trout in the East Outlet of the Kennebec River off of Moosehead Lake.

Above is a view of the New York skyline. The trip went pretty fast most of the way, despite hitting traffic around NYC and every other City along the way. By the time we reached the Maine line, we decided to reward ourselves with dinner and a pint. Lucky for us, we happened across Gritty McDuff's Brew Pub. Great atmosphere, great food, great beer. Hit the spot.

We eventually reached our destination, Moosetracks Family Cottages. Another beer or two and we were ready to get some sleep and start fresh in the morning... 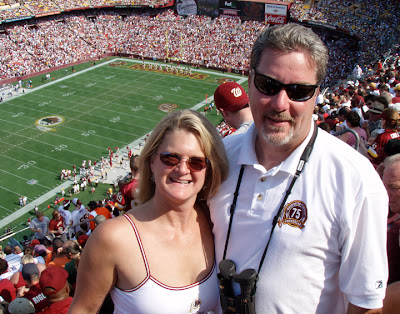 The Redskins celebrated our first season ticket game today by dominating the Lions in a 34-3 win. It was hot and sunny. I'm still waiting for a crisp, cool autumn football game but I guess October's just not late enough. But it was a great time. This is us at our very own seats! The view is pretty good even from way up there. Here's another view of the field right after a Chris Cooley touchdown in the second quarter. 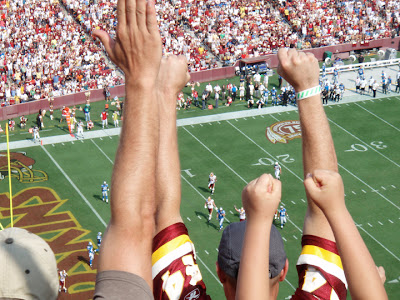 I've never been to Maine before, though I've always been drawn to the beauty of the northern states. Next week I will get to visit Maine with some friends, staying at a cabin near Moosehead Lake. Most of the other guys are also doing some bird hunting, and we'll be fishing for landlocked salmon, beautiful fish that seem to me colored like a brown trout but with a definite salmon shape to their heads.

I'm also told that the chances are very good for a moose spotting. The moose picture below was taken by my friend at the same place during the same week last year. That's Ed grinning with a landlocked salmon in the next picture.

So hopefully I will have fish stories and pictures to post when I get back! It's been a summer of pretty poor fishing, so I look forward to feeling that tug of life at the end of the line again. If not, at least there will be pictures of beautiful scenery, and stories about sharing a cabin with four guys and five bird dogs for six days. Sounds like an idea for a reality TV show if you ask me, but I'm really looking forward to the whole thing... 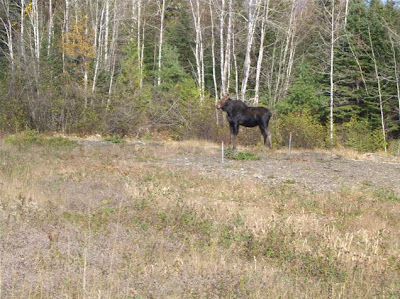 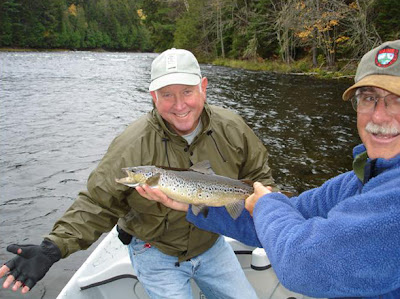 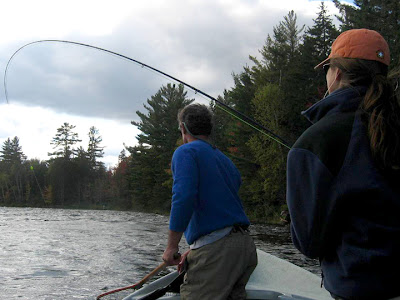