I was privileged to have the opportunity to once again fish the Rose River in Madison County, VA at the Rose River Farm, thanks to my friend and host Douglas. Tons (quite possibly literally) of really big, thick, meaty trout and gin clear water. My fishing skills limited my performance to just a couple over the course of several hours, but every trout I saw or caught was this size or bigger. This shot is misleading because his tail is falling away from the camera, but it's a nice size fish. Very nice. Really difficult to hold and photograph a trout this big by yourself, but that's a really nice problem to have!

Douglas, his awesome dog Enzo, and I think that must be Enzo's beer on the rock out in the middle.

Sunrise over the mountains. Boy, ice crystals in the late fall air sure do make for spectacular skies. Madison County is a beautiful place.

A face so great I had to put another Enzo shot up here. He's a Spinoni, and every time I spend time with this dog I am further convinced my next dog will be a Spinoni too.
Posted by Ed. at 12:23 PM 4 comments:

My wife and I were in Jacksonville, Florida over Thanksgiving, and decided to go fishing one morning. I didn't bring flyrods or anything, we just wanted a carefree morning on the water with an opportunity to catch some fish. Capt. Bill Schuller of Heads and Tails Fishing Charters met us in America's oldest city, St. Augustine, and off we went.

The tide was VERY high and, as a result, the fishing was slow. I was hoping to catch a redfish, but a couple hours in, fishing in the area of some old submerged bridge supports, we started to get a few speckled sea trout. I had never seen one before, this one pictured above is my first! They've got teeth unlike any I've ever seen on a fish before.

Soon after, I caught a nice bluefish that fought like hell! One of the nicest fighting fish I've ever had on the line short of a steelhead or fresh salmon. They've got some serious teeth too! Bill is a fly fishing guide also, and I think next time I'll try to get one of those bad boys on a fly rod. We had a great time and I could see making this a tradition whenever we head back to Jacksonville. Thanks for a fun time on the water, Bill!

At the Redskins game Sunday I was watching the Air Force soloist belt out a tremendous version of the National Anthem when my buddy tapped me on the shoulder and directed my attention to the four fighter jets getting larger in the sky across the stadium. I fumbled for the camera and snapped two pictures. The first was from pretty far away still and you see that view above. Then, right around 'Home of the Brave,' the jets - which were pointed straight toward our upper deck seats - flew directly overhead.

I don't remember if I ever put the camera up to my eyes, but as the jets screamed overhead I apparently clicked the shutter, my hands having dropped to my side as my head was turned upward, jaw agape. The sound was deafening. And then it got twice as loud. I totally lost interest in capturing it with the camera, and was just so thrilled to be experiencing it.

Rick Walker, on the staff of Extremeskins.com, evidently had his wits about him more than I, and took these really cool shots. I publish them here courtesy of Rick and with his permission. Thanks Rick!

I've seen flyovers before. Preakness comes to mind. But maybe the fact it was Veterans Day, maybe it was because we were so high up that the jets seemed REALLY close, but this was an indescribably powerful thing to witness.

God Bless America. THANK YOU VETERANS!
Posted by Ed. at 5:05 PM No comments:

Our Florida Kingsnake Belle shed recently, and I tried a different camera technique to try and capture her colors. I put her on a glass coffee table and set my digital camera on (don't tell Belle) 'cuisine.' I guess it focuses on the foreground only, uses the flash but retains bright colors. The room was lit, so the background dropping to almost black was a pleasant surprise.

Gearing up for winter trout... 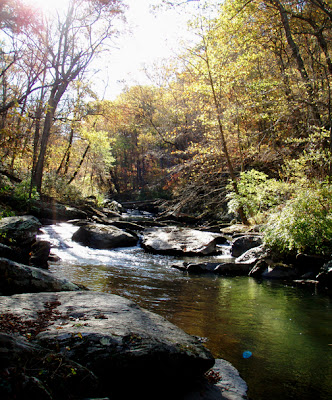 Last weekend I fished the Gunpowder for the first time in quite a while. Incredibly beautiful place, particularly when you look on a map and realize how close you are to Baltimore. The fishing, as has been the case with me almost all year, was poor. But I always leave the Gunpowder in a better state of mind than when I arrived, regardless of how successful I am with the fly rod. Saturday produced just a couple very small trout, and I hooked and lost a couple more. But I was pleasantly surprised when I picked up the camera today, I had forgotten snapping this picture but I think it accurately conveys the beauty of the place. I plan on doing a bit of winter fishing up there, and look forward to returning there when there's snow on the ground.
Posted by Ed. at 5:52 AM No comments: