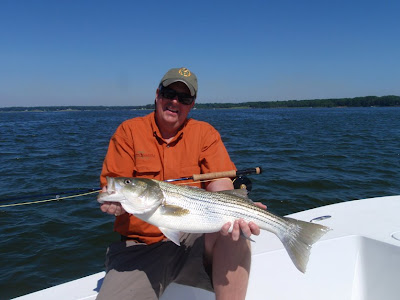 My friend Douglas is having fun fly fishing for Stripers on the bay this week. Looks like the weather's good and the fishing's better! Nice fish, Douglas!
Posted by Ed. at 6:14 AM 2 comments:

Thanks AHPS and NOAA!

I'm kind of confused about the relationship between agencies, but the National Oceanic and Atmospheric Administration, the National Weather Service and the Advanced Hydrologic Prediction Service maintains this amazing web site where you can get real-time water conditions anywhere in the country. I have been using it locally because I wade fish, but I'm finding myself even more interested recently because I started kayaking last year.

So I kept trying to find a way to display my nearby river gauge info on this blog, kind of like the weather widgets you see on sites all the time, displaying the weather at a vacation destination or golf course or something. Thanks to blogspot's ease of use I came close, but the RSS feed from the NOAA site was only displaying the location of the gauge, not the river level itself. So I felt like the RSS feed was the key, but couldn't figure it out until the webmaster of that site responded to my email with the suggestion to try another service to create the RSS feed widget.

The result is the widget you see at the top right of this page. Hardly worth a post explaining the process, I suppose, as the information is more for me than anyone else. But I wanted to acknowledge that a big organization like NOAA took the time to answer my question and help me work through it so I could get this little bit of code to work on my blog. Pretty cool.
Posted by Ed. at 8:48 AM 6 comments: 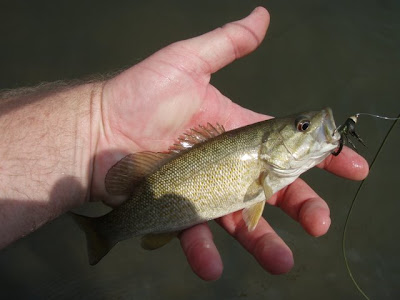 The wading was awkward through deep, soft mud. But I finally managed to get down to the river and throw a fly line in. Once I found a spot that didn't make me feel like I was standing in quicksand, it didn't take long for this smallmouth to take the fly and make a little history for me: The first fish caught from our very own back yard. While not a large fish by any measure, it was big to me.

I think I'll let things continue to dry out a little before I wade again, perhaps the kayak is the best tool for fishing this particular stretch of bank. In any event, it feels good to be fishing again.
Posted by Ed. at 12:09 PM 2 comments: 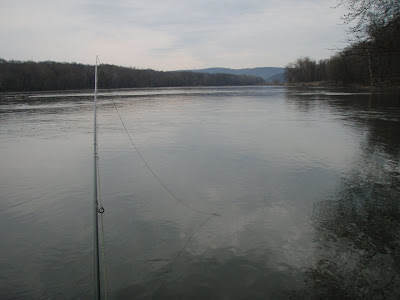 The river was too high, the water too cold, it was too early in the morning and the season and we had a full day of moving and unpacking ahead of us. But I couldn't resist the chance to walk down to the Potomac River at our new house, and fish under the shadow of our own back yard. Not a nibble to be had, but I couldn't care less. One of my favorite outings to date.
Posted by Ed. at 6:37 AM 1 comment: 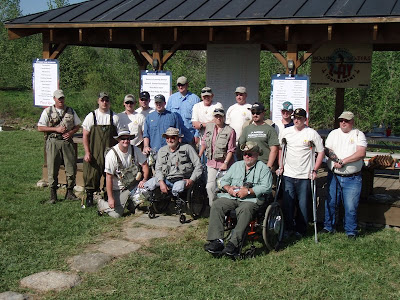 Project Healing Waters will be holding its 3rd Annual 2-Fly Tournament on May 3rd at Rose River Farm in Syria, Virginia.

I would also like to invite anyone who reads this blog and, like me, wonders sometimes how to show support for the brave men and women who fight so hard and sacrifice so much for our country, to join me in this pledge.

Last year's winning team caught close to 50 trout. I would assume the average will be a considerably lower number. But in case things go gangbusters, anyone joining me in this can put a cap on their pledge of whatever they want - $250 perhaps. But as long as those vets are catching fish, my pledge stands no matter how many are caught that day!

So please consider joining in by posting a comment right here and pledging to commit to a dollar - or even fifty cents or a quarter - for every fish caught by a pro/vet team on May 3rd!

I know times are tough right now, but if you can't help out monetarily, please consider linking to this post on your blogs or web sites. It doesn't take much to get the word out into the blogosphere, but I need the help of everyone reading this!
Posted by Ed. at 8:40 AM 1 comment:

Snow on the Rose River 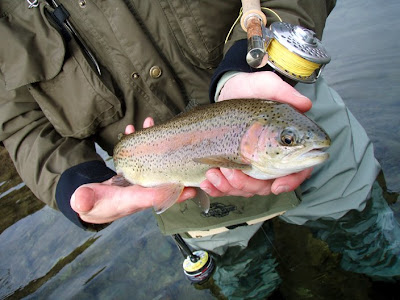 A few nights of VERY cold temps had my friends Kevin, Bill and I a little concerned about ice on our schedule trip to Rose River Farm. But it was only down around zero for a couple nights, and the day before we went, it was back up around freezing. There was some ice around the edges, but the flow was very good and the fish were - as they always are - present.

It was pretty cold early on, but thankfully there was no wind. I've fished at the Farm enough to know where large populations of fish live, and it was funny how we would look off the bank into a hole and see maybe one or two fish. Maybe spook one and not see it till it moved. Then the sun would come out for a few minutes and the bottom of the river would be covered with fish we couldn't see a moment ago. It's neat to see so many nice sized trout in one place, but it is kind of depressing to realize you've been drifting a fly over a pod of about forty trout for a half hour without so much as a nibble.

But it warmed up a bit and the fish started biting. Then around mid-day we got a really cool little snow shower! I very much wanted to catch a fish in the snow, but it didn't last long and it seemed to shut the fish down for a bit. Maybe a barometric pressure thing, I'm not sure.

In the end, we caught plenty of fish and in many different ways. I caught fish on nymphs, san juan worms and wooly buggers sub surface, but also with a small caddis and a griffith's gnat on the surface. Kevin had a lot of success with the gnats.

Winter fishing at Rose River Farm is a lot of fun, I never used to consider the possibility of dry fly fishing in January, but I caught at least as many off the top as sub-surface. Another winter fishing note: I overdressed for the weather with a nice pair of neoprene waders and was toasty warm all day. The kind with the boots built in are WAY warmer than the stocking foot kind. You sacrifice some mobility, but if you want to be warm all day standing in near freezing water, it's worth it! 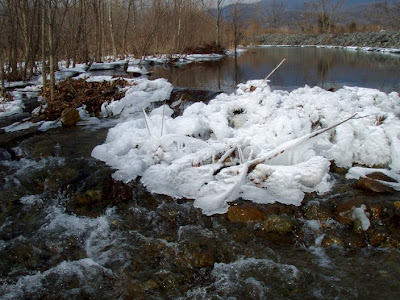 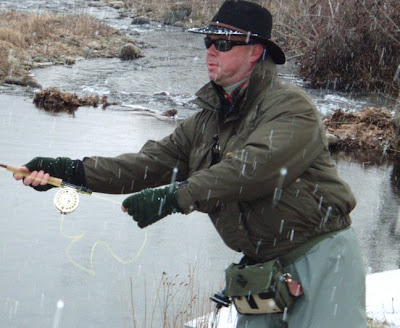